Fresair gives you the freedom to: 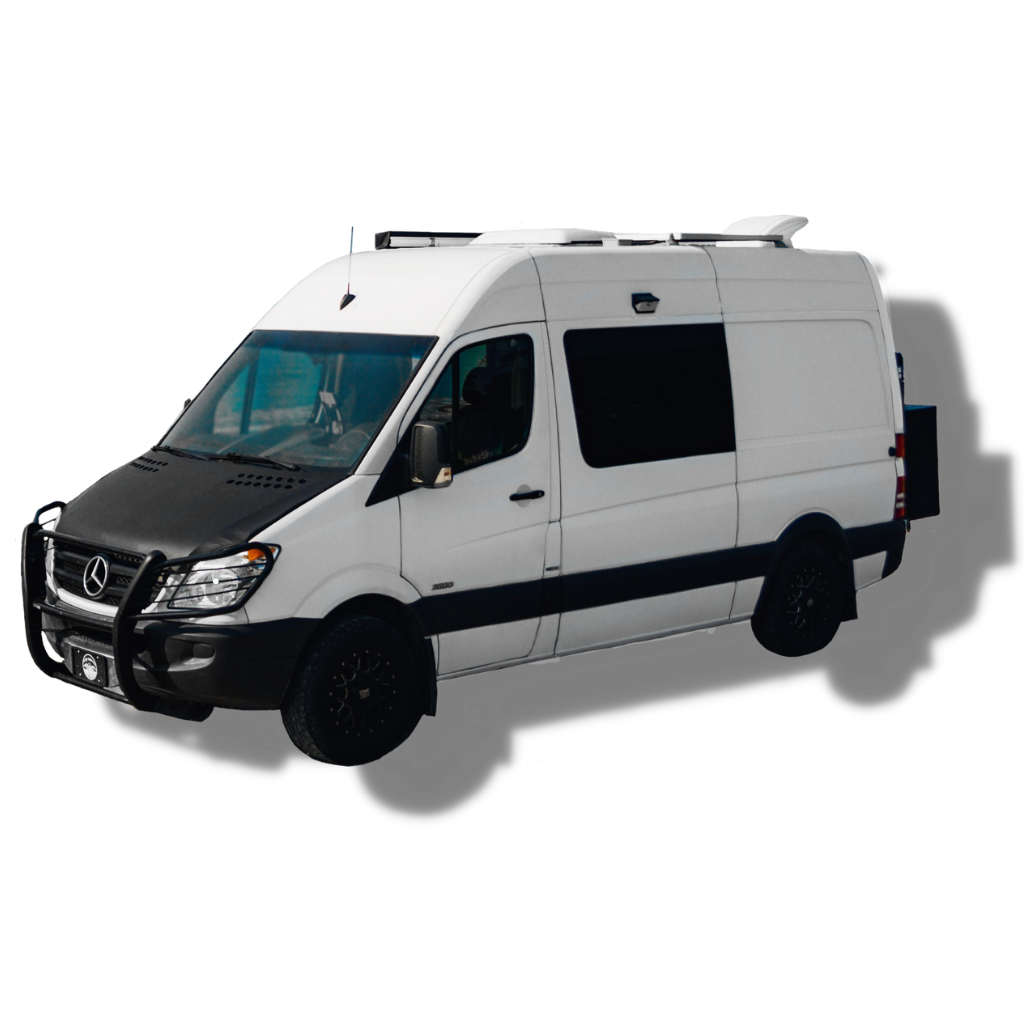 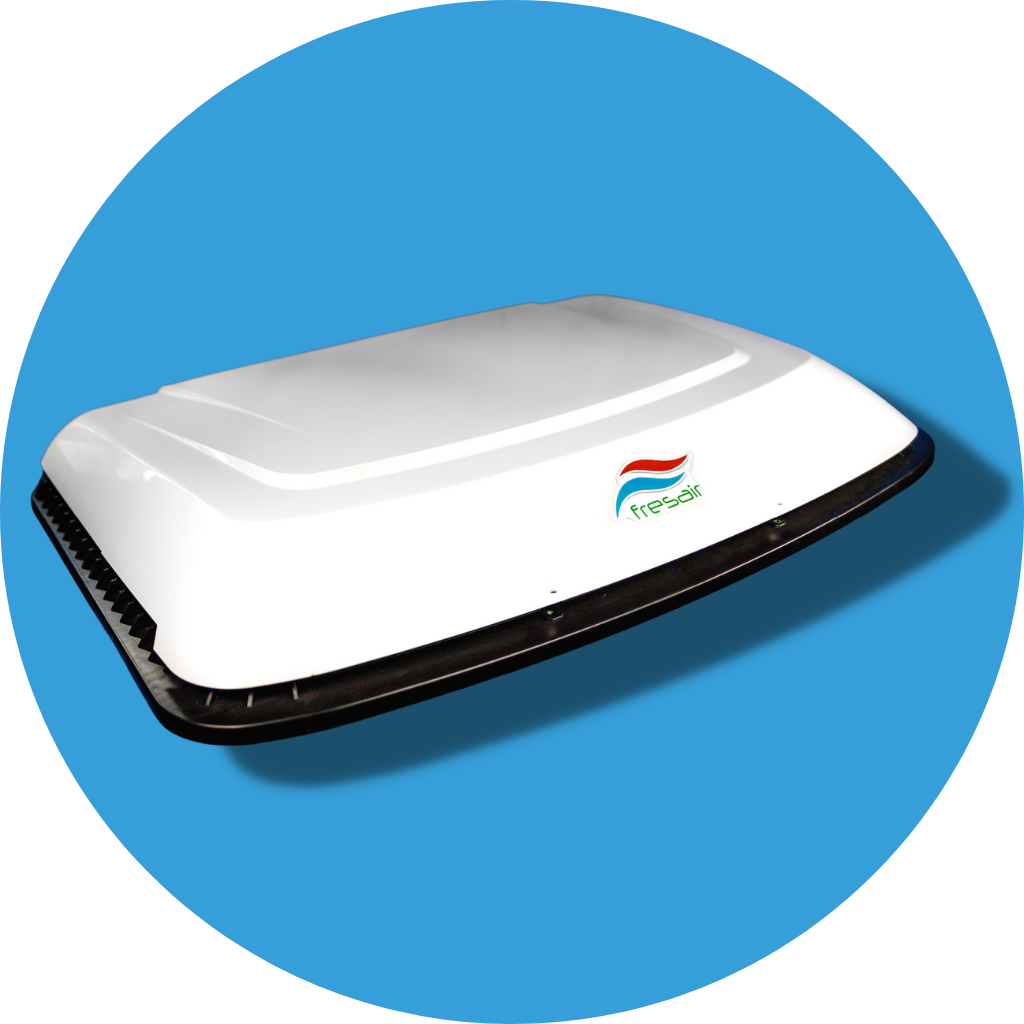 Simply put, it’s a 12V Van Conversion Air Cooler and also our pride and joy. What makes the Fresair better than other Air Conditioners is its state-of-the-art engineering. Having an evaporative cooling system with not only a powerful and forceful breeze, but also cold air and temperature reductions of up to 40°F make it a compelling solution for your build. We often see traditional air conditioning units demand high power whilst running on refrigerant.  Our 12V Van Conversion Air Cooler can be powered through the vehicle’s existing battery or an installed battery bank recharged via solar and maintains low power consumption–we’re talking approximately < 8 amps drawn per hour on max power. Which sets it apart from other van conversion air conditioners that need to be run on shore power or generators.

The Van Conversion Air Cooler itself is very slimline at only 3.7″ tall but packs a punch with four adjustable vents and our latest smart control panel safeguarding the system. It not only looks great but is also a completely green technology, even filtering dust and pollen out of the air keeping the driver’s well-being our top priority.

Why is it better than the rest?

The Fresair Van Conversion Air Cooler works by forcing air through a moist fibrous organic anti-bacterial, anti-fungal pine filter which is then triple filtered and circulated with tap water from a remote hidden reservoir. This means no moisture is produced. 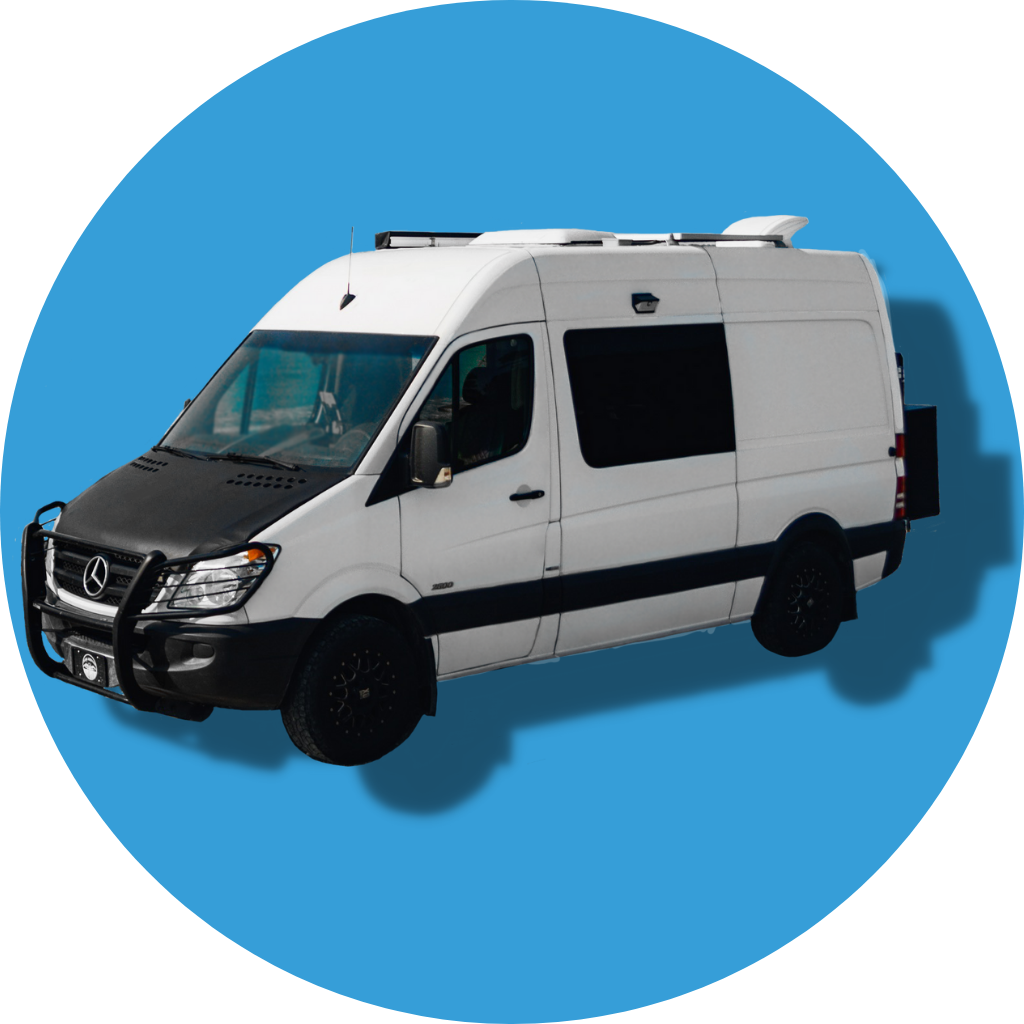 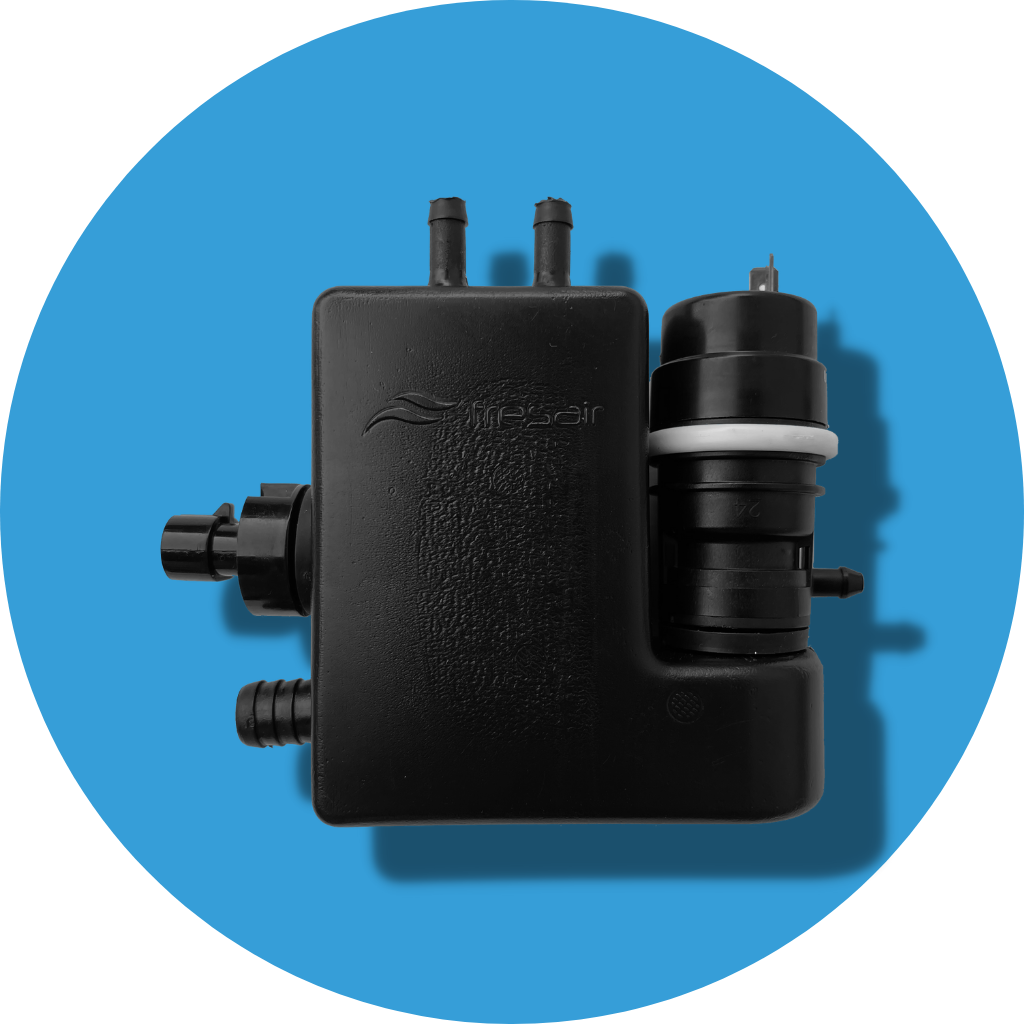 We’ve just released our new Mini Reservoir! It provides convenience for vanlifers who want to simplify their van build, as well as optimize and maintain a lean build.

Why You'll Love It

Weighing in at only 25lbs you’ll be less top-heavy.

The Fresair Van Conversion Air Cooler has a low sleek profile of 3.7”, streamlined (no wind noise) and it’s sexy as hell. It’s form factor is so low it will even fit underneath roof racks or solar panels.

The internal control panel has four directional air-craft style vents to direct air where you need it. Aim vents towards head and chest for optimal cooling.

External noise is so low as to run all night with no attention from passers-by or camping neighbors. Very discreet and no compressors making you the target for noise-police.

Fresair will install easily into any pre-existing standard 14”x14” opening.

WARNING: The airflow on full blast will literally blow your hairpiece off. This is nothing like a regular fan, the airflow is intense.

The Fresair Van Conversion Air Cooler runs on water and battery power alone as well triple-filtering the air and running clean, even off solar power alone, Fresair is your green energy solution.

State-of-the-art evaporative cooling technology delivers cool air, not moisture. With a fan-only mode, you can also simply keep air moving without the use of water.

No heat venting from the unit, runs cool even in direct sunlight, you can even install a rooftop tent above it and maintain comfort for all.

Traditional AC is designed to work in a sealed-off environment. Who wants to keep everything shut up tight when the idea is to be out there enjoying everything freedom has to offer? Our system runs even with open doors, creating a cool airflow. At night just crack a window to keep air circulating and fresh.

With two reservoir options, an 18L reservoir built for larger capacity water storage or a mini reservoir designed for optimal space capacity. At peak usage Fresair will use under 1L of water per hour. 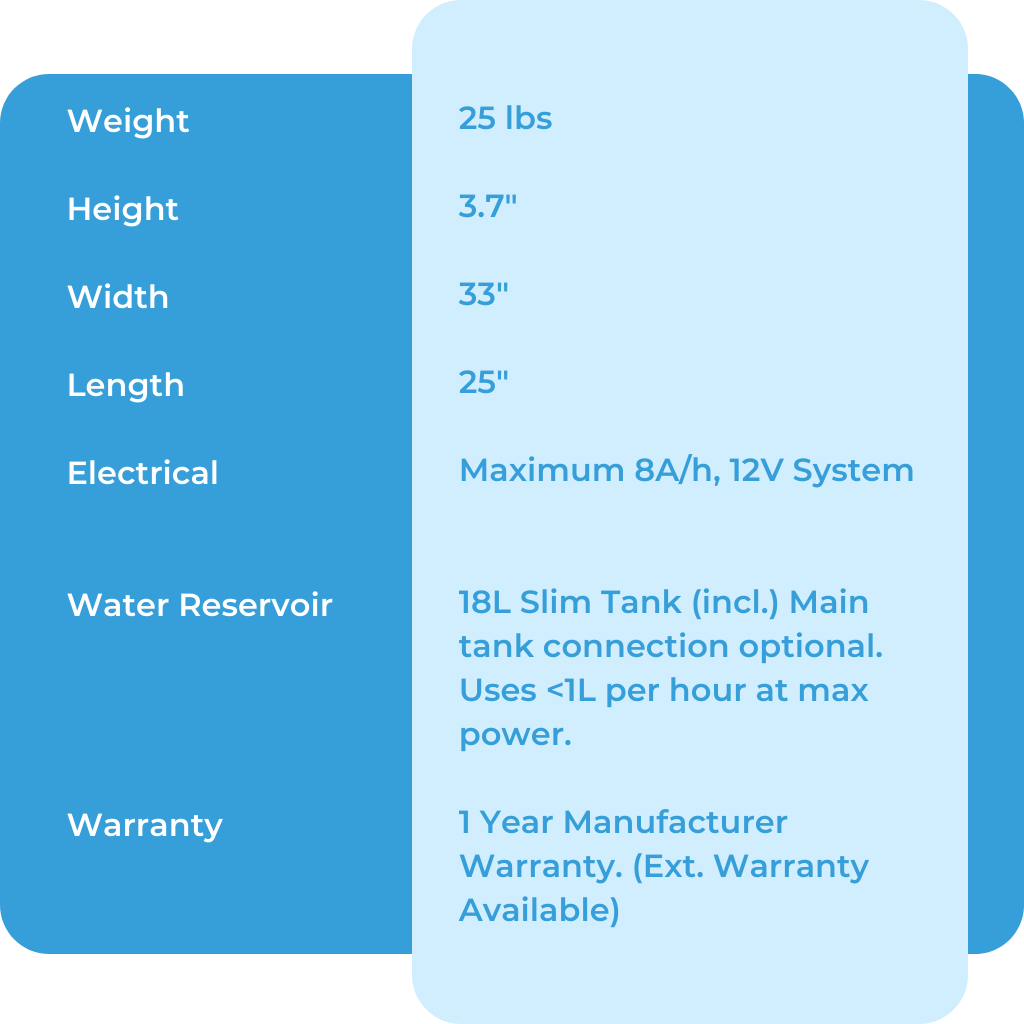 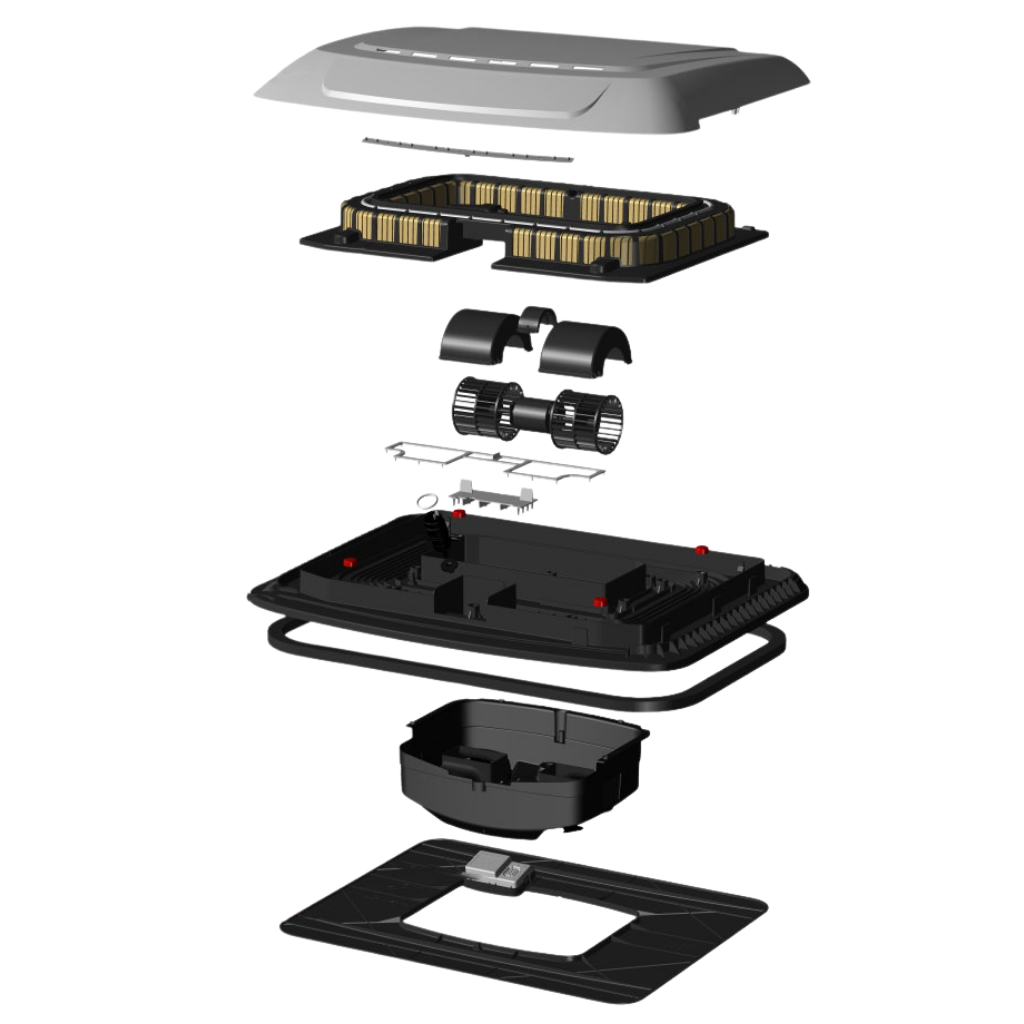